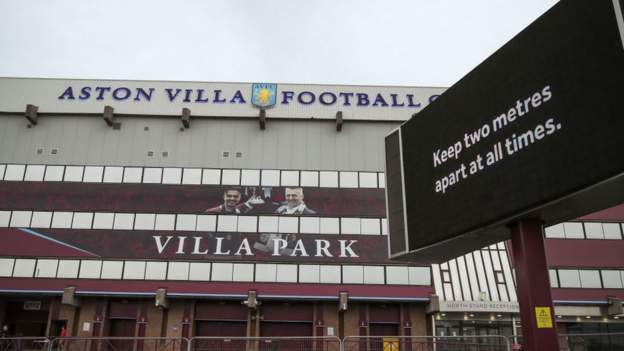 Aston Villa’s FA Cup third-round tie with Liverpool is in doubt after a “significant” coronavirus outbreak at the Midlands club.

Dean Smith’s side are scheduled to face the Reds at 19:45 GMT on Friday.

Villa said a decision as to whether the game can go ahead will be made on Friday “pending the results of additional Covid19 testing”.

A large number of first-team players and staff are in isolation after returning positive tests on Monday.

The Premier League club’s training ground was closed on Thursday after a second round of testing produced more positive results.

“Discussions are ongoing between medical representatives of the club, the Football Association and the Premier League,” Villa said in an earlier statement.

Southampton’s FA Cup third-round game against Shrewsbury on Sunday was called off on Thursday after a significant number of Shrews players and staff tested positive for coronavirus.

Wayne Rooney and Derby’s first-team squad will miss their FA Cup tie at Chorley on Saturday following a Covid-19 outbreak which closed their training ground on Monday.

The Rams’ team for the game at Victory Park will be made up of under-23 and under-18 players.