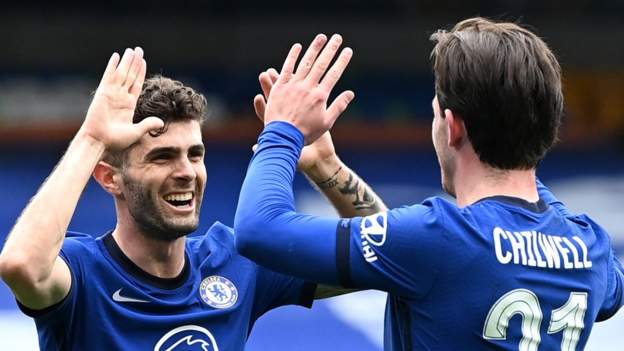 The Blues, beaten finalists last season, went ahead in fortunate circumstances as Ben Chilwell’s low cross was steered into his own net by Blades midfielder Oliver Norwood.

Christian Pulisic was twice denied by away goalkeeper Aaron Ramsdale and Callum Hudson-Odoi shot over as the hosts looked to finish off the game.

With Sheffield United pushing for a goal to take it into extra time, Chelsea broke in injury time and Hakim Ziyech scored their second with a low strike to take them into the last four for the fourth time in five seasons.

The semi-finals will take place at Wembley over the weekend of 17-18 April and the draw will be shown live on BBC One – during half-time of Sunday’s quarter-final between Leicester City and Manchester United (kick-off 17:00 GMT).

Blues back to Wembley

Chelsea lost 2-1 to Arsenal in the 2020 final in August – as Frank Lampard failed to win a trophy in his season and a half in charge.

His last game as manager was the 3-1 fourth-round victory over Luton in January and new boss Thomas Tuchel has steered them to wins over Barnsley and Sheffield United to send them back to Wembley.

This victory continues their fantastic record under the German, who is yet to lose in his 14 games, has lifted them from ninth to fourth in the Premier League and also taken them into the Champions League quarter-finals.

Before the game at Stamford Bridge, Chelsea had caused confusion by publishing the wrong team on their Twitter account.

When they corrected it, it showed they had made nine changes from the side that began Wednesday’s 2-0 win over Atletico Madrid as a number of squad players were given the chance to impress Tuchel.

They went ahead in the 24th minute when the unfortunate Norwood steered the ball into his own goal from Chilwell’s cross and were only denied a second when Pulisic’s shot was blocked by Ramsdale.

Pulisic, starting for only the third time under Tuchel, almost scored in the early stages of the second half when he superbly dribbled past two Blades defenders but was denied by Ramsdale, before firing the rebound over from a tight angle.

Chelsea then had to show their defensive strength for a spell in the second half but Ziyech scored for the second game in a row to seal the victory late on.

For Sheffield United this was their last chance to salvage something from a miserable season, in which they have languished at the bottom of the Premier League. They are 14 points from safety with only nine league games remaining.

After finishing ninth in 2019-20, the Blades have won only seven matches in all competitions in 2020-21, with former boss Chris Wilder, who had taken them up from League One to the top flight, leaving the club by mutual consent earlier this month.

This was only Paul Heckingbottom’s second game in caretaker charge following Wilder’s departure and the Blades had been thrashed 5-0 at Leicester on Wednesday in his first.

Heckingbottom, without defender Chris Basham and striker Billy Sharp because of injuries, saw his side put in a hard-working performance, but once again their lack of cutting edge up front was shown.

McGoldrick, back in the side after missing the Leicester loss with a knee injury, had chances at the start and end of the first half but could only shoot straight at home goalkeeper Arrizabalaga on both occasions.

The Blades, who have scored the fewest number of goals in the Premier League with 16 in 29 games, should have equalised when McGoldrick was free but could only send a diving header wide from Lundstram’s cross.

McBurnie was also denied as Sheffield United could not breach a Chelsea defence that has now conceded only twice in almost two months under Tuchel, with the hosts keeping their seventh successive clean sheet in all competitions.

‘We were clearly tired’ – what they said

Chelsea boss Thomas Tuchel, speaking to BBC One: “[It] sounds excellent to say we’re through to the semi-finals – it was a tough match. We had a good first half where we controlled everything. We lost control in the second half, we were clearly tired.

“After 14 consecutive matches I could feel we were tired and we made many little faults. We were lucky to keep the clean sheet in the second half but I think it’s the first time in the 14 games we have looked tired. It’s important to go through in the cup and that was the target and we reached it.

“We let them come back because we had full control in the first half and in the second half [we had] a big chance with Christian Pulisic to finish the game early. We made too many easy mistakes and lost duels and lost some momentum. I could tell in training we were tired and there was a lack of concentration.

“That can happen sometimes, it gets harder to keep the level up – I’m happy we could help from the bench and in the end we have the win so we take that.”

Sheffield United interim manager Paul Heckingbottom, speaking to BBC One: “It’s a sickener but there are a lot of pleasing things. We more than deserved extra time. We want to look forward and take the positives.

“We’ll never get a better chance, I don’t think we started in the first half but we had a go second half and I was pleased with the response.”

“The first goal is disappointing because it was good play but we could have dealt with it. The second one you accept it might come up and you’re susceptible. If it hadn’t gone in we would still have two minutes to try again and have another chance because when we were going forward we were causing them problems.

“I’m encouraged, it’s been another week of turmoil and adversity, the boys we have put out showed a fight and willingness. The worst thing that can happen is we lose a football match and the best thing is we win one and everyone will be talking about it. We can’t lose focus, we move on.

“It will be nice to get the players away for a while. Some boys are away on international and then we’ll all be back together in a few weeks. But we’ll be working hard with the boys we’ve got left.”

The teams have a week off because of the international break with Chelsea next in action on Saturday, 3 April with a home Premier League game against West Brom (12:30 BST) before the first leg of their Champions League quarter-final away against Porto on Wednesday, 7 April (20:00 BST).

Sheffield United play at Leeds in a Yorkshire derby on 3 April (15:00 BST).