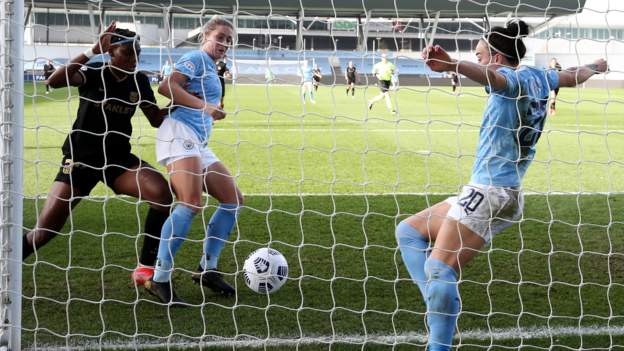 Manchester City were knocked out of the Women’s Champions League by Barcelona as a 3-0 first-leg deficit proved too much to overturn despite a 2-1 win on home turf against the Spanish side.

City cut the aggregate lead to two goals when Janine Beckie stabbed in Sam Mewis’ knockdown in the first half.

However, City’s hopes were dented when Asisat Oshoala tucked home to restore Barca’s cushion after the break.

Sam Mewis gave the Blues a lifeline from the spot but it was not enough.

Gareth Taylor’s side have not reached the semi-final stage since 2017-18 when they lost to Lyon, but gave a much better account of themselves than they did in the first leg.

They can now focus on their push for the Women’s Super League title, as they look to chase down leaders Chelsea.

Barcelona will face either holders Lyon or Paris St-Germain in the semi-finals.