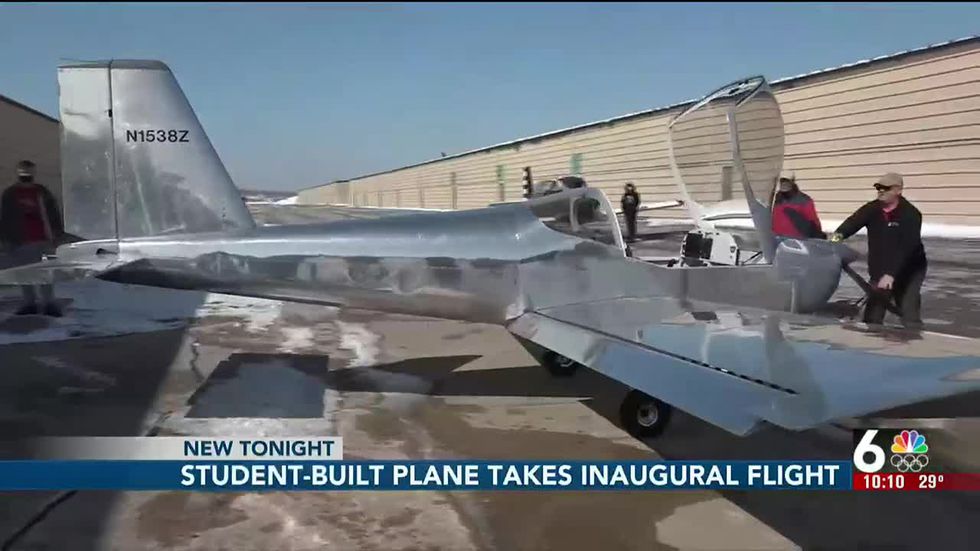 OMAHA, Neb. (WOWT) – For more than 3 years, a group of students from the Omaha area has been building a plane from scratch. Saturday afternoon, it took its inaugural flight from Millard Airport.

Some of the students who worked on the plane were there to watch it fly, including twin brothers Scott and Tyler Swanson. They helped with the Aviation Nation project for 3.5 years handling the rivets on the wings, the interior, and the electrical work.

“We were working off a giant construction set,” said Scott Swanson, who is now studying at UNO. “Mentors would help us but basically they’re guiding us in what the instructions read and we’d go and do it ourselves.”

“I learned a lot. That was the big part,” said Tyler Swanson, who is also now a student at UNO. “I was a pilot for most of it so I didn’t really know the mechanic side of things so I got to learn a little more about airplanes as well.”

The Swanson brothers first got involved with the Aviation Nation project when they were students at Burke High School and part of the school’s Air and Space Academy.

In fact, the director of the academy, Andrew Brooks, says several Burke students have helped with the plane over the years under the watchful eyes of FAA-certified mentors.

“This gives students the opportunity to take what they’re learning in the classroom and turn it into something that’s practical, that’s real, that’s preparing them for the real world,” said Andrew Brooks.

“The skills I learned through this thing will help me all the way through my life, I was very glad to take up this opportunity,” said Kellan French, who worked on the plane for about 2 years.

He watched the finished product successfully take off Saturday afternoon and reflected on the journey to this point.

“It was wonderful to see our hard work pay off,” he said.

French says the group worked on the plane in a corner of one of the hangars at Millard Airport. They’d go there a couple of times a week. He helped with the fuel lines, the engine, the propellors, and more.

“All those times cramped in the back of it, fixing everything, and every time something broke having to fix it again, it was all worth it in the end,” said French.

Most of the students, like the Swanson Brothers and Kellan French, are pursuing careers in the aviation industry. The Swanson brothers want to be airline pilots – the two already have their pilot’s licenses – and French is studying aerospace engineering and rocketry at Iowa State.

Until then, they’re soaking up the satisfaction of a job well done.

“It was kind of cool because it’s like, ‘wow I actually helped build that and now it’s in the air,’” said Tyler Swanson.

With the RV-12 complete, Jim Beyer, the man who piloted the test flight and who is one of the mentors with Aviation Nation, says they now plan to transition to the EAA chapter 80 Zenith 750 project. The hope is for the project to begin within the next month or two.